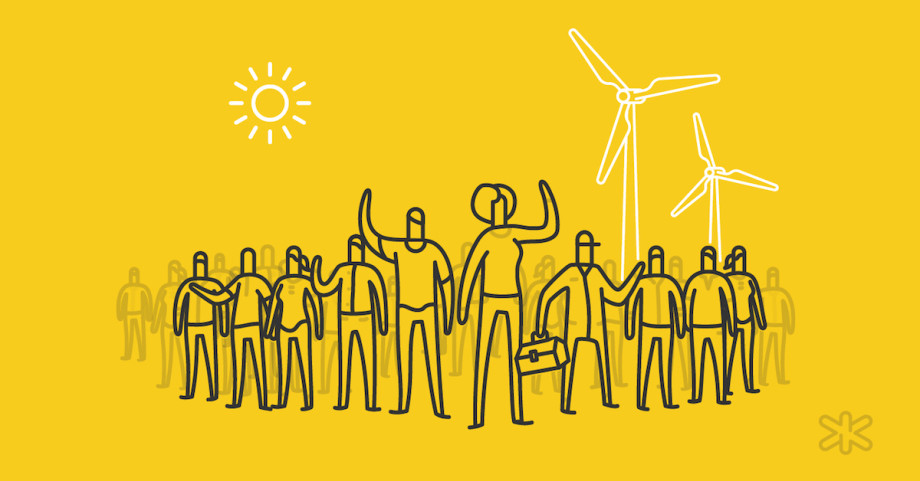 The Truth About Alternative Energy

When it comes to the energy we use to power our homes, we have a choice: to use clean energy or to use dirty energy. And despite how simple this may sound, the questions about what makes energy clean or dirty, and even how accessible one is over the other, can lead to a lot of confusion and misinformation. So, we're here to help set the record straight and get to the bottom of some of the most confusing, or misunderstood, aspects of clean energy.

So let's take a closer look at some of the most common clean energy myths and determine once and for all what's fact — and what's fiction.

The myth that energy generated by renewable sources is more expensive than energy generated by fossil fuels may have been true in the early 2000s, but today that couldn't be further from the truth. The price for renewable energy, no matter which source it comes from, has decreased substantially since 2010, and currently, they are just as cost effective as electricity generated by coal, oil, and natural gas — if not cheaper.

According to figures published by Lazard, an investment bank based in New York, combined cycle gas turbine (CCGT) plants come in at $0.05/kWh and coal at $0.09/kWh. By comparison, electricity produced by solar power, both utility-scale photovoltaic (PV), and concentrating solar power (CSP) costs around $0.07/kWh, that from onshore wind turbines about $0.05/kWh.

And at this rate, renewable energy prices are likely to continue to fall. In contrast, fossil fuel prices continue to rise year-over-year. So when it comes to making the most cost effective decision, clean energy takes the lead.

Myth #2: Clean energy takes up tons of land and space

Wind farms and solar arrays do take up some space. A study from MIT suggests that the entire expected electricity demand in 2050 would need approximately 33,000 square kilometers of land if solar power were the sole provider. Just using the country's sunniest parts would reduce this to 12,000 square kilometers.

Those 12,000 square kilometers for solar farms don’t seem quite so much, do they? Of course, that is ignoring all the other forms of renewables.

When it comes to Wind Farms, powering a third of the country with wind power would require around 66,000 sq-km according to Australian environmental scientist Barry Brook.

Despite this, technology is constantly improving and becoming more efficient, so ultimately less land is needed for the same amount of power production.

Indeed, solar panels do not (currently) work at night, and wind turbines do need wind, but technology is evolving at an incredibly fast rate and scientists and engineers are finding ways to make more sensitive panels and turbines.

There is also the rapid innovation in new storage technologies to be added to the mix. Huge leaps forward have already been made, and there is no doubt that efficient, cost-effective batteries will be with us soon. There is even a suggestion that when electric vehicles become common, they can be networked to provide one huge battery.

This myth comes from an incorrectly quoted quote that became a viral post on Facebook. It purported to be a statement from an anthology edited by Thomas Homer-Dixon.

Scientist David Hughes actually wrote the text, and the full quote is: “The concept of net energy must also be applied to renewable sources of energy, such as windmills and photovoltaics. A two-megawatt windmill contains 260 tonnes of steel requiring 170 tonnes of coking coal and 300 tonnes of iron ore, all mined, transported and produced by hydrocarbons.

“The question is: how long must a windmill generate energy before it creates more energy than it took to build it? At a good wind site, the energy payback day could be in three years or less; in a poor location, energy payback may be never. That is, a windmill could spin until it falls apart and never generate as much energy as was invested in building it.”

Sites are carefully chosen for modern wind turbines to make them as efficient as possible. Also, their simple technology requires the minimum of maintenance resulting in far more energy produced that is used in their manufacture and commissioning.

Myth #5: It is hard to access renewable & clean energy

Inspire makes it ridiculously easy to access renewable and clean energy. Signing up online or by phone is a two-minute process, and then it won’t be long before your home is powered by renewable energy. We will ensure that you buy 100% renewable energy. Click here to join us today.

At the moment, clean energy cannot supply the globe’s energy requirements. Will it one day? Of course! The push to clean energy has only just begun, yet the growth has been phenomenal.

A 2019 report from the International Energy Agency (IEA) suggests that by 2024 the world’s solar capacity could grow by 600GW, almost double the installed capacity of Japan. Overall, it says, renewable electricity is expected to grow by 1,200GW in the next five years, the equivalent of the total electricity capacity of the U.S.

It will take time, but there is no reason why clean energy cannot supply all our needs. In perhaps as little as 30 years, many countries will be 100% reliant on renewables. With ever-improving technologies, it is impossible to predict quite when the world will no longer use non-renewables, but it is just when not if.

Climate change is a global problem. It is quite proper that governments have stepped in to incentivize a change to renewable energy sources. The faster the world moves on this, the better. But the idea that government subsidies are necessary is not born out by the figures. According to the International Renewable Energy Agency (IRENA):

The fact is, that global subsidiaries are offered to speed up the process and encourage more businesses and homes to move to renewable energy. However, the solar panel business is booming (valued at $115.24 billion in 2019) and it shows that it is not solely government encouragement that is pushing people to make a change.

Myth #8: It takes too much time and effort to be energy efficient We hear you, our daily lives can get hectic and stressful.

Between work or school, family life, and social activities, our lives fill up fast. Many people feel like they want to be more energy-conscious, but don't think they have the time. Change out light bulbs? Replace flooring with sustainable options? Install solar panels? Being energy conscious isn't just about these larger changes to your home.

Technology is becoming more automated. The natural complement to this automation is energy saving. It's part of the package. Getting an automated thermostat like the Nest is the first step, as it learns your behavior and adjusts your household's temperature automatically. You can also dive a little deeper by integrating it with weather app capabilities so that it starts cooling your house when it's a hot day. The Halo1 is another smart device – a smoke detector that features a highly sophisticated weather radio to alert you well in advance of severe weather, helping you plan accordingly.

We can all agree that the less we have to fiddle with smartphone apps in order to be energy conscious, the better. Integration with Amazon’s Echo featuring Alexa voice recognition was the talk of CES this year. Everyone wants to make sure their device can be activated through Alexa's voice command capability, which means less friction between you and your daily routine. Turn the lights off by just saying so? Ordering pantry items before they go out of stock as soon as you think of it? Done and done. Smart refrigerator technology is also getting more sophisticated — now, you won't have to worry about forgetting about that produce you bought last week going bad. As the world moves to better technology that becomes personalized and automated to your own lifestyle, you will become more energy conscious without even realizing it.

Myth #9: Solar panels are too expensive for the average person This myth perpetuates the idea that renewable energy is only for rich elites while the working class can barely juggle cost of living expenses.

In fact, installing solar panels is cheaper than it ever has been. Like any other home remodeling project, solar is considered an investment because of the long-term benefits once installed. On average, each kilowatt of installed solar power adds $6,000 overall to a home’s resale value2. That means even a small 3 kW system will add a lifetime value of $18,000 to your home.

Solar calculators can help determine how much it would cost to install solar on your home. They factor in a household’s actual monthly usage and location to determine costs and lifetime savings from installing solar. For a typical household, it’s around $11,000 upfront for a 3.5 kW solar system. That’s without factoring in federal and state tax incentives or rebates. The Federal ITC (Investment Tax Credit) that offered a 30 percent discount on solar installations was recently extended in 2015. Though the recent policy changes may impact that, it’s clear that installing a solar system gives you a huge return on investment.

Myth #10: There aren’t as many jobs in clean energy In an economy that’s still on the recovery, jobs are on everyone’s minds.

When looking at national policies, a lot of people seem to think that clean energy improvements mean less jobs, especially in regions that have been historically centered around coal and oil. To them, closing coal mines is a death knell for their local economies.

While it's true that badly executed policies have left some regions relying on fossil fuels, sustainable policies do not mean fewer jobs. In fact, they actually mean more jobs since the clean energy umbrella casts a wide net. Instead of focusing on one, finite source, there's a wide breadth of industries, sub industries and job specialties that can apply to each source: solar, wind, and hydro.

In the solar industry alone, there are twice the as many jobs3 when compared to coal and gas. Many solar jobs are construction related, due to the increase in demand for contractors when building bigger solar farms (and a lot more of them). In total, clean energy employs around 770,000 people4. That number will only continue to grow.

So there you have it: three energy myths busted for good. With more jobs in clean energy than fossil fuels, there’s no need to compromise environmental conservation for the sake of economic growth. Additionally, with solar panels becoming more affordable and smart tech devices automating our lives, it’s easier than ever to become energy conscious. Forget alternative facts and stick to actual ones. Knowledge is power, and the more you know, the better you can fight against misinformation and hysteria. The results are clear: sustainability is creating a future that is smarter, cleaner, and brighter.

Want to learn even more about renewable energy? It starts here.