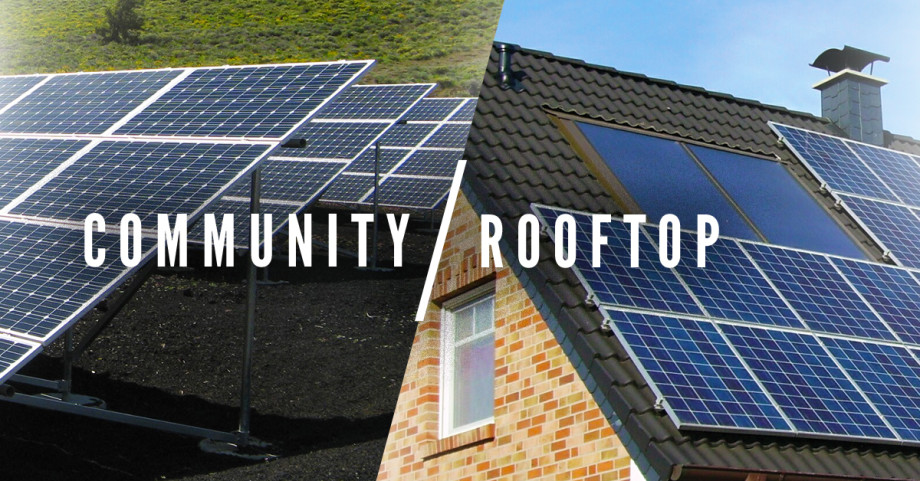 What's the Difference between Community Solar and Rooftop Solar?

Solar power as an energy source has roots of discovery going all the way back to the early 19th century when it was found that certain elements – under the right conditions – would generate electricity when exposed to the sun's rays. Today, modern innovation is pushing solar technology forward in more efficient and scalable ways to help bring solar power to more homes than ever before.

The benefits of solar power from an environmental perspective are well known.

Simply put, solar energy is 100% renewable and releases no harmful emissions into the atmosphere. However, there are cost effective incentives available to consumers that can make solar energy even more appealing. You can even sign up with a renewable energy company like Inspire to take advantage of all the benefits of renewable energy in under a few minutes!

The Public Utility Regulatory Policy Act of 1978 (PURPA) is a law that states that power providers must purchase power produced by grid-connected renewable energy sources – like a home powered by solar – at the same rate that it would cost the utility company to generate that energy themselves.

Ok, what does that mean, in English? It means if you have solar power, and you produce more energy than you use, the utility company has to buy it from you at a fair price. It's the law.

There are two prevalent methods for accessing solar that some homeowners have the option to choose between today. You can also bypass the installation of expensive solar panels by switching to renewable energy today with Inspire.

What is rooftop solar?

Rooftop solar is where homeowners install panels on their individual homes by either leasing or buying panels.

What is community solar?

Community solar allows residents in a given neighborhood or city the option to access one local solar power supply, built with pooled financial resources. These community solar installations utilize land more suitable for efficient solar energy capture – for example, being built on open commercial land – thus avoiding some of the potential limiting factors of rooftop solar.

Essentially, community solar allows for a resident to buy a share of a local solar system and the energy produced by it without installing anything.

What is more popular: community or rooftop solar?

As the efficiency of available photovoltaic cells has increased, and the cost of solar panels has gone down substantially, nearly a million US homeowners have chosen to install solar panels on their rooftops. Additionally, as the cost of solar equipment declines, residential solar power is becoming an effective way to significantly reduce a household's electricity expenses.

Community solar has also gained increasing popularity. California, Colorado, Massachusetts, Utah, and New York were some of the first states to host programs, and the list of states is growing quickly.

Both rooftop solar panels and community solar can be helpful ways to cut electricity expenses, while reducing a household’s carbon footprint.

Rooftop photovoltaic systems consist of solar panels mounted on the roof of a residential or commercial building, which convert sunlight into electricity.

These systems are small, designed to serve the needs of a single building. While solar panels usually don't provide 100% of a building's electricity – which is intentional to be maximally cost efficient – they can dramatically reduce dependence on the grid. For homeowners, this translates into lower electric bills.

To determine whether a roof is suitable for a photovoltaic system, an installer calculates how much cumulative sunlight you get over the course of a year. This is dependent on several factors:

Instead of using individual rooftop PV systems, members of a community pool their resources to invest in a shared solar power supply. Since 2014, the US community solar market has grown from a mere 66 megawatts to 1.8 gigawatts, and currently 25 states have at least one functional community solar project, according to the SEIA.

These shared renewables can provide access to solar energy for people who may be unable to install their own rooftop PV systems. One of the largest community solar benefits is that it can include renters, who may be prohibited from installing solar panels, and homeowners whose roofs are too shaded or too small to accommodate solar panels.

Because these projects are shared and public, they absolve residents of the maintenance and upkeep required for solar panels. If something goes wrong with a community solar installation, it's the job of the project developer or administrator to fix it. Although, it must be said that reputable solar installation companies should offer warranties that cover your rooftop installation in case of damage or defect.

There are two common models for participating in a community solar project: ownership-based or subscription-based.

Ownership-based participation allows users to own some of the solar panels or a share of the project as a whole. They are able to benefit from the part of the system that they own. Some people buy their panels up front, while others use a bank loan to finance their portion.

According to the National Renewable Energy Lab, there are many models for utility-scale community solar. Three of the most common are:

Both community and rooftop photovoltaic systems provide a convenient, efficient, and cost effective way for people to improve their environmental profile.