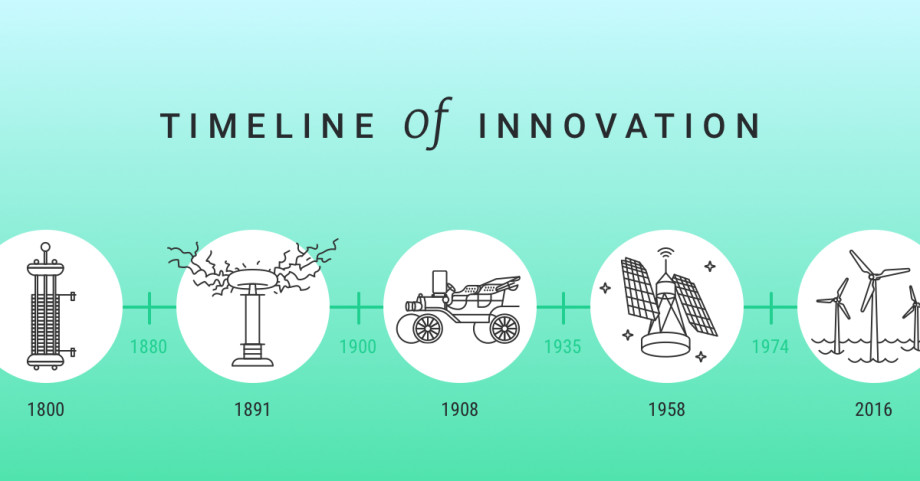 A Timeline of Innovation from 1800 to Today

We're in the midst of rapid scale technology improvements to clean energy, and the pace will only accelerate as clean technology becomes smarter, cheaper, and more efficient. The clean energy revolution is well underway and has been for a long time. This Earth Day we've rounded up our favorite innovative moments in history that have driven growth advancements in sustainable energy. The 19th century started out strong with scientist Alessandro Volta1 creating the first battery, consisting of a stack of alternating metals separated by brine-soaked cloth.

Simplistic in its design, it successfully conducted an electrical current. We use the same technology today to power our fully electric, gas-free cars.

Honda may have made hydrogen fuel cells more popular in recent years, but this type of alternative fuel goes way back. Edison was granted the historical patent for the incandescent light bulb3, paving the way for its domestic use in the United States.

Although he wasn't the original inventor, his patent win allowed the technology to become far more commercialized and standardized. Incandescent bulbs are still used today, although light technology has been improved with LEDs, which are more energy efficient and have a longer lifespan. Absolutely electrifying in its results, the coil4 is forever associated with this genius inventor who championed low voltage and low-current, high frequency alternating-current electricity.

His research and inventions were the basis of X-ray technology and the circuits featured in medical equipment and spark plugs until the 1920s. Most people think of Hybrids as a recent invention, but their roots were established a century prior.

Flex Fuels were championed first by Ford. They mass produced a version of their Model T that ran on either gasoline or ethanol. Even back in Ford's day, people were already thinking about alternative fuels.

The plant was built in Larderello, Italy5 -- the same place where the first geothermal generator was successfully tested 7 years earlier in 1904.

Magnifica! Geothermal power still goes into the grid today, with plants operating around the world. The United States currently produces the most with a total of 3.5 gigawatts of geothermal power. Today, drought concerns have limited production of new hydroelectric plants in certain areas, but for many years, Hoover Dam was an irreplaceable source of clean power to the Southwest region of the United States.

Though the foundation for solar cell technology started much earlier with Polish scientist Jan Czochralski, the scientists at New Jersey's Bell Labs were able to create the first practical solar cell6 that could convert the power of the sun into electrical energy.

Today, companies like Solpad are making portable solar panels that you can take on camping trips or tailgating events – all thanks to the innovation that Bell Labs spearheaded. Just 4 years after Bell Labs created the first solar cell, the US was the first to launch a satellite powered entirely by the sun.

It was aptly named The Vanguard, because it is still going strong today and remains the oldest artificial object orbiting the Earth. Spurred on by the oil crisis in 1973, Scottish inventor Stephen Salter found a way to harness wave energy by fitting gyroscopes inside a pear-shaped device that resembles a bobbing duck on the waves.

Though 90% efficient at capturing power from waves, funding for the project was cut down after oil prices rebounded. Wave power today lags behind solar and wind, but studies are still being done to try to improve on Salter’s design. In response to the oil and natural gas crisis of the 1970's, President Jimmy Carter urged the push towards renewable energy and alternative fuels in his historic public address.

As a result, the US Department of Energy was created later in the year.

It started a domino effect for the next five years of policy changes and innovations centered on trying to halt the effects of global climate change. Al Gore and the team behind the documentary ended up winning an Oscar for their efforts in 2007.

The Intergovernmental Panel on Climate Change released their report that concludes that climate change was caused and accelerated by human activity.

This further cemented the reality that climate change is a serious issue and policies must be implemented in order to preserve our planet for future generations. Electric cars got a makeover when Elon Musk, founder of the car company Tesla, released the Roadster and disrupted the traditional gas-aholic car industry.

It turned major heads with its top speeds and long battery range, renewing interest in the electric car as a whole.

Google and Waymo disrupted the car industry further by working on autonomous vehicles with the goal of improving road safety, air quality, and congestion.

Competitors such as Uber soon caught wind of their plans and started work on its own autonomous vehicles7.

To date, the Ivanpah solar plant in the Mojave Desert is still the largest solar plant.

Upon going live, it generated 392 megawatts of clean power, enough to power 94,000 American homes. Solar as a whole became more accessible to homeowners thanks to tax incentives. As of late 2016, solar installations have increased by 95%.

Pushing beyond the car industry, Tesla announced its plans for a home battery that can store energy generated by a homeowner's own rooftop solar.

This will allow individuals to become energy independent from the national power grid.

Transatomic Power, a company founded by MIT PhD students, started work on a molten salt nuclear reactor that would be less costly and consume its own nuclear waste as fuel.

It will reduce the contamination risks associated with depositing nuclear waste and will eliminate the possibility of nuclear reactor meltdowns like the ones that happened at Five Mile Island in New York and Fukushima in Japan. Other companies like ThorCon Power in Florida and Moltex Energy in England have their own molten salt reactors in the works. Set off the coast of Rhode Island, the Block Island Wind Farm was the first offshore wind farm in the US with a total capacity of 30 Megawatts.

Plans for a 15-turbine wind farm off Long Island's eastern coast start taking shape. Other states like Texas already lead the nation in onshore wind. The cheaper and more normalized it becomes in the United States, the closer we will get to a 100% clean power national grid.

At 92, the former president championed the construction of a 1.3 megawatt solar plant that supplies his hometown of Plains, Georgia with 50% of its power needs.

This is one of the best examples of a town built on renewables and will pave the way to future conversations about creating sustainable communities and cities.

Each of these moments in clean technology allowed for the next iteration or innovation to happen. Without early work in developing batteries, we wouldn't have them powering our cars today. And without the historic electric lamp patent from Edison, we wouldn't be able to come up with an improvement like LEDs. The advancements we have today are only possible with the foundations that were laid in the past.

In the future, there will be fewer homes powered by dirty power as the grid becomes filled with all types of clean energy sources like wind energy and solar energy, which will be even cheaper to make as technology improves. At Inspire, we’re thrilled to be a part of this clean energy future by providing members with the option to choose clean power. The future of clean energy is looking brighter than ever.

Not an Inspire member? Learn how easy it is to make the seamless switch to renewable power.