Which States Produce the Most Wind Energy? 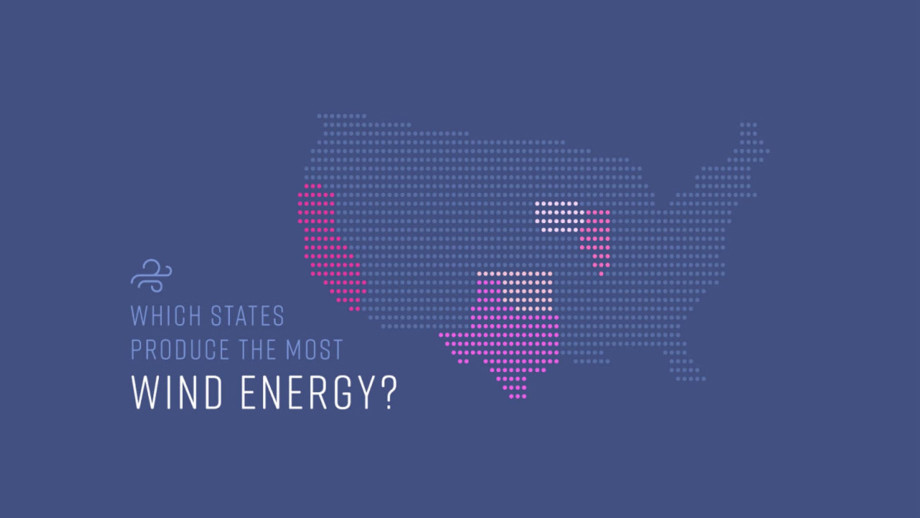 What are the top wind energy producing states?

Since the 1970's, concerns about the sustainability and environmental impact of fossil fuel usage has spurred the growth of wind power technology. Today, electricity derived from wind farms powers about 20 million homes per year in the United States. By 2030, according to the U.S Department of Energy1 it is entirely possible that wind energy will provide 20% of the nation’s total power.

Today, a total of 40 U.S. states, including Hawaii and Alaska, use utility-scale wind farms for electricity generation.

Which states produce the most wind energy?

Among states that make use of wind farms to power electrical grids, 12 states dominate, accounting for a full 80% of wind energy in the United States.

Below are the top 5 states by wind power generation:

When people think of Texas, they often think "oil country".

Since Texas is historically known for leading the nation in domestic oil production, it might seem surprising that they’re also the nation’s leader in wind energy. There are over 40 different wind farm projects in Texas, with a total combined rated capacity of 17,911 MW. In 2015, wind accounted for an impressive 9.98%2 of the total electricity generated in Texas.

In many regions of the state, the wind is one of the most widely available natural resources for power generation. This is especially true in the Texas Panhandle region, the Gulf Coast area south of Galveston, and the mountain ridges of the Trans-Pecos area of the Chihuahuan Desert, at the western edge of the state.

Not only does the wind provide clean energy, but it’s also been a boon for the state’s economy. Texas farmers can lease parts of their land to wind farm developers, creating a useful revenue stream for Texas’s agricultural sector. The wind power industry has also created thousands of jobs.

The largest wind farm in Texas is the Roscoe Wind Farm, 200 miles west of Fort Worth, which boasts 634 wind turbines and has a wind energy capacity of 781.5 Megawatts.

Iowa is another U.S. state leading the way in clean, renewable wind energy.

In 2012, wind made up over 25% of the state's generated electricity and they've only invested more in wind energy since that time. The rise of wind energy in the state of Iowa started with a 1983 state law that required investor-owned utilities to purchase 105 Megawatts of power generation from wind. Ever since then, the state has been a national leader in wind energy.

The state of Iowa encourages the growth of renewable energy sources and economic renewable energy impacts through legislation and tax incentives. Wind facilities receive tax breaks, and turbine equipment is exempted from the state's sales tax. Most of Iowa’s wind farms are found in the north and northwest regions of the state, where winds are stronger on average.

As of late 2015, the state of California has over 6,000 MW of wind-powered electricity generation capacity.

Wind energy supplies around 5% of the state's total electricity. This state was the site of some of the very first modern wind farms in the 1980s, and by 1995, California generated 30% of the world's wind energy. Only recently has California's use of wind been overtaken by Texas and Iowa.

The arid western half of the state of Oklahoma is particularly well suited for wind energy generation.

As of 2014, over 17% of the state's total electricity generation came from wind energy. Western Oklahoma is part of a region of the U.S. that's often referred to as the "wind corridor". Stretching from North Dakota and Montana southward to western Texas, this region's comparatively high average annual wind speeds make it uniquely amenable to wind power generation.

In 2015, wind energy provided 5.53%3 of the total electricity generated in Illinois.

The first wind farm in Illinois was installed as recently as 2003, but within the last decade, the state has expanded its wind energy utilities to become a national leader.

In 2007, Illinois introduced a renewable portfolio standard that required electric companies to derive 10% of power from renewable resources by 2010, and 25% by 2025. Today, most of the state's wind-derived electricity is distributed by a company called Midcontinent Independent System Operator, which primarily services southern Illinois.

If you’re looking for a quick and easy way to make an impact, sign up for a 100% clean energy supply plan for your home.

Not sure if renewable energy is right for you? Read some of Inspire Clean Energy’s reviews to see how we've helped customers make the switch.